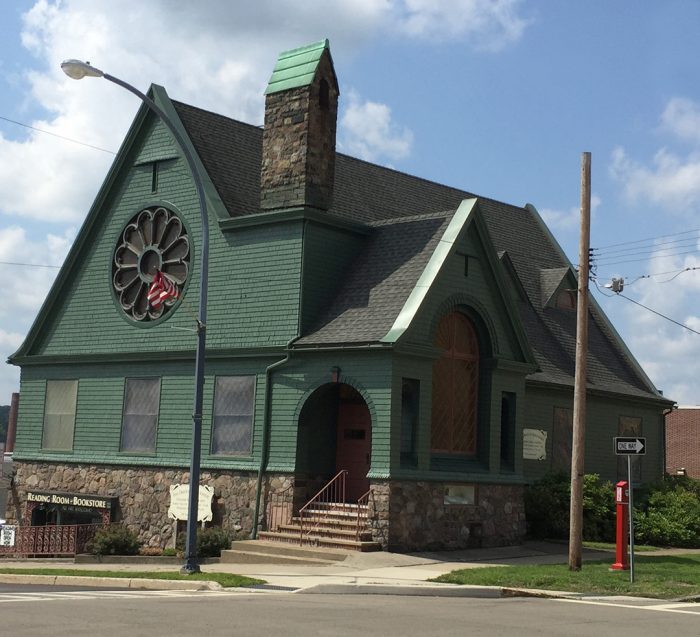 Over a century ago, a small band of local residents met in the home of Mrs. Frances Strunk to talk about their study of Christian Science. This was a new religion, based on the Scriptures and designed to reinstate Christian healing. In 1886, Mary Baker Eddy, the founder of Christian Science, sent one of her students, Miss Sarah Clark, to instruct these sincere seekers in Jamestown. Under Miss Clark’s inspired guidance, the early pioneers of this city made many demonstrations of healing in the community and Christian Science flourished. In 1889, Miss Clark conducted the first public service and in 1891, she formally organized the church. Here is a testimony published in 1905 of a local resident on how Christian Science changed his life.

One year later, Mrs. Rose E. Kent, a dedicated worker, purchased the site located at the corner of Fourth Street and Prendergast Avenue for this building across from her home, which is now the Robert H. Jackson Center. The church edifice was built in 1893 and is the first purpose built church of this denomination in New York State and the fourth in the United States. Mrs. Kent took instruction from Eddy in 1898, the famous last class. She was Eddy’s close friend and associate as well as a teacher and practitioner of Christian Science.

The architect for this structure was Charles D. Wetmore, Mrs. Kent’s son by her first marriage. As a partner in a prominent New York City firm, his credits also include the Biltmore Hotel and Grand Central Station. Mr. Wetmore’s design combines Romanesque with Shingle Style.

Stones were personally gathered from the Kent farm and wood was chosen from nearby forests. These native materials were skillfully worked to create intricate detailing: a saw-tooth edging where the wood meets the stone base and a chimney that serves as a modest “tower” braced by a scrolled iron rod. The construction is simple with massive wood hammer-beam trusses supporting the steeply pitched roof.

Each end of the nave has a rose window. The window at the front is stained glass. The members decided that since their textbook was titled “Science and Health with Key to the Scriptures” they would incorporate golden colored “key-shaped” glass.

A fine organ made by the J. H. Petrie Company of Erie, PA was installed when the church was built. It has 12 ranks.

Since the church was constructed in 1893, for 125 years Christian Science has been part of the Jamestown community. We welcome visitors to view the inside of the church and enjoy the many beautiful aspects of the interior.